Banda Bassotti is an Italian ska-punk band formed in 1987 in Rome, Italy.

Their songs are generally political in nature, focusing on Communist and anti-Fascist issues. Many are about Ireland and Latin America, as well. The band was inspired by The Clash and The Specials. The band was politically active from the beginning, attending protests and sympathizing with anti-Fascist movements in Italy. Their name derives from the Italian version of the Disney characters The Beagle Boys. Banda Bassotti born in 1981 in Roman sites where a group of comrades and friends began to organize actions of solidarity with the oppressed people like the Palestinians, the Nicaraguans and Salvadorians with the construction of schools and housing. In 1987 the boys decided to form within this 'Work Brigade', a band that was inspired by Punk Rock and Ska socially committed, first of all by The Clash and The Specials. In 1991, together with other bands involved in the Roman scene starring in the project 'BALLA E DIFENDI' (Dance And Defend), Banda Bassotti contribute with the tracks 'Sveglia' (Wake) and 'All Are Equal For The Law'. After the success of these early tracks, the band decided to release a own album. 'FIGLI DELLA STESSA RABBIA'(Children of the same anger), distinguished by belonging to the working class and its social struggles and detachment from the corrupted Italian political system, themes always dear to Banda Bassotti and present in all their albums. 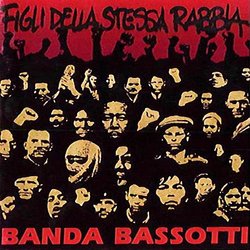