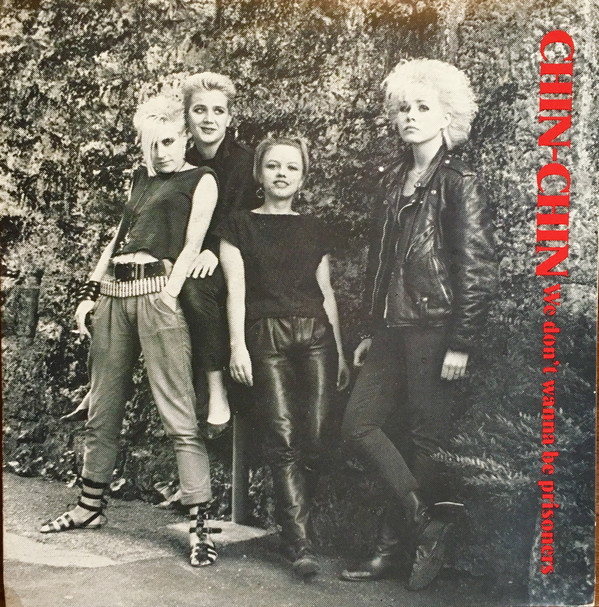 Chin Chin, an all-female group formed in 1982 in Biel, Switzerland.

Chin Chin, an all-female group consisting of Karin (guitar/vocals), Esther (bass/vocals) and Marie-Anne (drums/vocals), was formed in 1982 in Biel, Switzerland. At the time experience wasn't needed, a desire to play was. Technical ability was a bonus, a hunger to perform a must. So, although Esther and Marie-Anne had experience as singers for local band [a1447189], neither had actually played bass or drums respectively before. Similarly, while Karin had some training in classical acoustic guitar, she'd never been in a band or played electric guitar before. It was veteran Swiss punk-rock band SOZZ that gave the eager girls their first break, letting them practice in their rehearsal room and lending them guitars and drum kit until they could afford their own. Musically the band had many influences: The Clash, The Ramones, X-Ray Spex, Blondie, Generation X, Siouxsie & The Banshees, David Bowie, Motown, 1960s girl groups and glam rock bands like T-Rex and Slade. Early rehearsals saw the girls cover classics such as The Ronettes' "Baby I Love You" and The Crystals ' "De Do Ron Ron Ron" due to their relative simplicity, but original material soon followed and, in November 1983, Chin Chin played their first gig at the AJZ/Coupole in Biel. Although the band started life as a trio, it was always the aim to recruit a lead singer and a second guitarist, but the search was to prove very difficult. Although there was a vibrant alternative scene in Switzerland, female musicians were virtually non-existent. There were plenty of girls wanting to sing, but few who actually could. The band would hold more auditions than the singers could notes. And although Chin Chin saw themselves as a punk-rock band, catchy pop vocals and harmonies played a big part in their songs, setting them apart from the other contenders in the process. Eventually, Carol joined the band as lead singer and Chin Chin's first and only 7" "We Don't Wanna Be Prisoners" (containing 3 self-penned songs) was released in the summer of 1984 on the band's label Farmer Records, co-owned with SOZZ, making Chin Chin one of the only all-female bands in Switzerland writing their own material, playing regular gigs and releasing records. However, soon after recording, Carol left Chin Chin, and Karin, Esther and Marie-Anne decided to continue as a three-piece with Karin and Esther sharing lead vocals at live gigs. In 1985, Chin Chin's album Sound Of The Westway was released on Farmer Records, containing 12 original compositions recorded and mixed in just 7 days. Sound Of The Westway is a brilliant mix of punk-informed crunch and buoyant pop melody that shows Chin Chin to be true pioneers of DIY noisy pop. As it happens this combination of DIY punk ethic, fuzz guitars and bubblegum pop was also gaining traction in the UK with the nascent C86 scene. Featuring bands like Shop Assistants and The Pastels, C86 was a confluence of young bands who were as influenced by Phil Spector as The Ramones, and Chin Chin fit right in next to groups like The Rosehips and The Fizzbombs. Sound Of The Westway caught the attention of NME journalist The Legend!, who published the first UK interview with the band. On the heels of this great press, Chin Chin were approached by the management of Scottish band The Shop Assistants with an offer to support them on their German tour. The tour was hugely successful, leading to the release of the "Stop Your Crying" EP on Scotland's legendary 53rd and 3rd label and a busy period of appearances on TV, radio and more gigs in Switzerland, France and Germany. Apart from headlining their own gigs, Chin Chin also supported bands like The Pogues, The Anti-Nowhere League, TV Personalities, New Model Army and Die Toten Hosen. Sound Of The Westway has gone on to become one of the most sought-after 80s indie-pop records and for good reason. Tunes like "Dark Days" and "Stay With Me" still sound remarkably fresh today; the band's fierce DIY stance and girl-positive ethics have echoed down through indie music since. 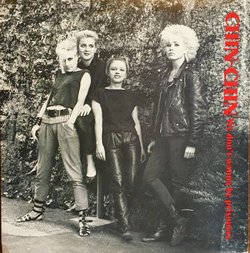 sound of the way west