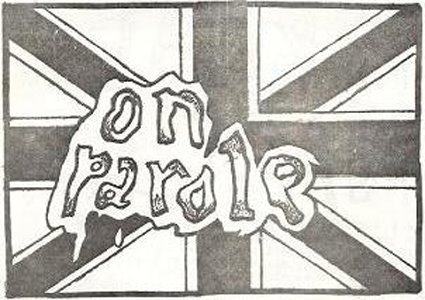 Band from livingston formed in 1979

1979-83 From Livingston come a four piece band called On Parole, they formed in '79 with the line-up as: Dickie - Drums, Bob - Bass, Wullie - Guitar and Liam - Vocals. After a few gigs there was various changes until the line up of: Liam - Vocals, Graeme - Bass, Dougie - Guitar, and Steve - Drums. Dougie and Graeme joining after another local band called Another Youth split up. They played their first gig with that line-up at a disco at Deans community high school with a heavy rock band from London called Visa. Their set that night was - Grass, Condemned, Assault, On The Run, Crown Court (twice), and a cover version of Chaos. Since then they have giged locally and headlined at Skunx with Skroteez and the Business. In June '82 they recorded their first demo tape which had five tracks on it. On Parole sound something like the 4 Skins, Infa Riot, Samples, Sex Pistols but is difficult to describe really. Their lyrics are meaningful and are written by Liam as is the music. No Future and Riot City have expressed interest in the band and no doubt we'll be hearing more of On Parole in the future. Liam - Vocals Wullie - Guitar Bob - Bass Dickie - Drums Dougie (ex-Another Youth) - Guitar Graeme (ex-Another Youth) - Bass Steve - Drums John - Guitar 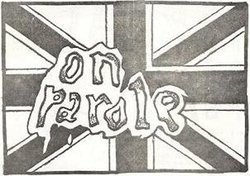