Sofa Head were formed from a previous band called Dan (see [a=Dan (13)]) with Claire Sykes on vocals, Ian Wallis on guitar & vocals, founder Ian Armstrong on bass guitar and Andrew Laing on drums & vocals. Tracks from the band's first first demo, "World" and "Ugly" appeared on the Meantime Records compilation "Spleurk!". Early performances featured a drum machine until the band managed to lure drummer Laing from the audience. [b]Sofa Head[/b] cut 4 albums. "Pre Marital Yodelling (1127 Walnut Ave.)", the title of which is an oblique reference to both Jehovah's Witnesses and Laurel & Hardy. Recorded in July 1989 it was released on Meantime in the UK, on the Double A label in Germany and on the Profane Existence label in the USA. This was followed by a single release "Invitation To Dinner" on the Rugger Bugger Discs label and a John Peel session. This single featured on the 2nd album "What A Predicament". The band released a 12", titled "Twat!", featuring 2 studio tracks & live tracks on the flipside. Laing left the band and joined "Leatherface", replaced by a drummer called Graham (surname unknown) for the 3rd album "Acres Of Geeses". However, Graham disappeared on the eve of the support tour and Laing filled in, finally being replaced by Matthew Woodward from the Cleveland band KITO. This line-up did 2 European tours and a live US 4th album "More Is Not A Word In Our Vocabulary". [b]Sofa Head[/b] disbanded in 1994. Sykes joined indie band "Elliot", Wallis retired and Armstrong formed "Rugrat" with Laing. This group did 3 EPs and a Peel session and became the group "Bulltaco". The 1st & 2nd albums have subsequently been released on a 'Boss Tuneage' compilation CD "Pre Marital Predicament". 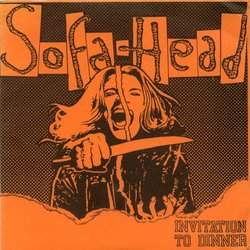 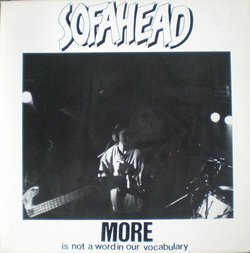 more is not a word in our vocabulary 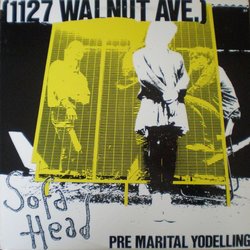 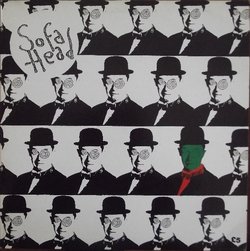