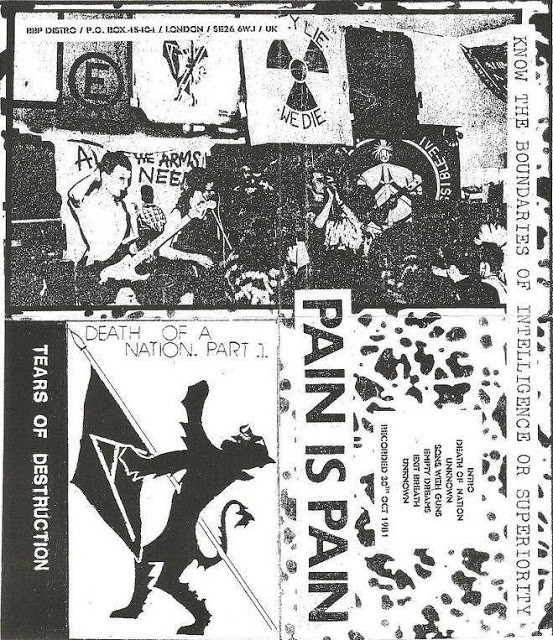 1982 - 1983 Rob Lynch (ex-Polemic Attack) - Bass Mike Lynch (ex-Polemic Attack) - Guitar Chris Blackman - Drums David Hodge - Guitar Rebecca Treloar - Vocals Ian Davidson (pre- Bliss The Pocket Opera, Ye Fungus) - Vocals Bubbles - ? After Polemic Attack split up, It turned into Tears of Destruction. Rob and Mike Lynch took the bass and guitar duty's. Another band, Infamy, helped provide the other members. Chris Blackman played drums, David Hedge was the second guitarist, and Rebecca Treloar joined as vocalist, and Ian Davidson as second vocalist. Another early member was a girl named Bubbles, but she didn't make it too long in the band. They played their first gig at Fareham Technical College, supporting Dirt. Tears of Destruction held many shows, helping several bands play and get their message out such as Dirt, Polemic, Ad Nauseam and 11th Commandment. Tears of Destruction entered Toucan Studios in Hayling Island, to record their 'Death of a Nation:part 1' Demo. It eventually got the attention of Dick Lucas from The Subhumans, and got an official release on Bluurg Tapes. Afterwards, they played several gigs, getting better and better each time, and began writing more material for a second demo(Death of a Nation:Part 2). Unfortunately, they split while they were at their highest. It happened in late 1983 due to personal reasons. Their two vocalists were asked to leave(they were a couple at the time), which was terrible news for them, but they had apparently 'stepped over the line'. The band tried to continue with new vocalists, but it fell apart and split. They played their last gig together(they considered it their best gig) at the Portsmouth Wedgewood Rooms, a benefit for South East Animal Liberation with Flux of Pink Indians, Omega Tribe, Andy T. and Polemic. Most of the members went onto play in several bands.

death of a nation