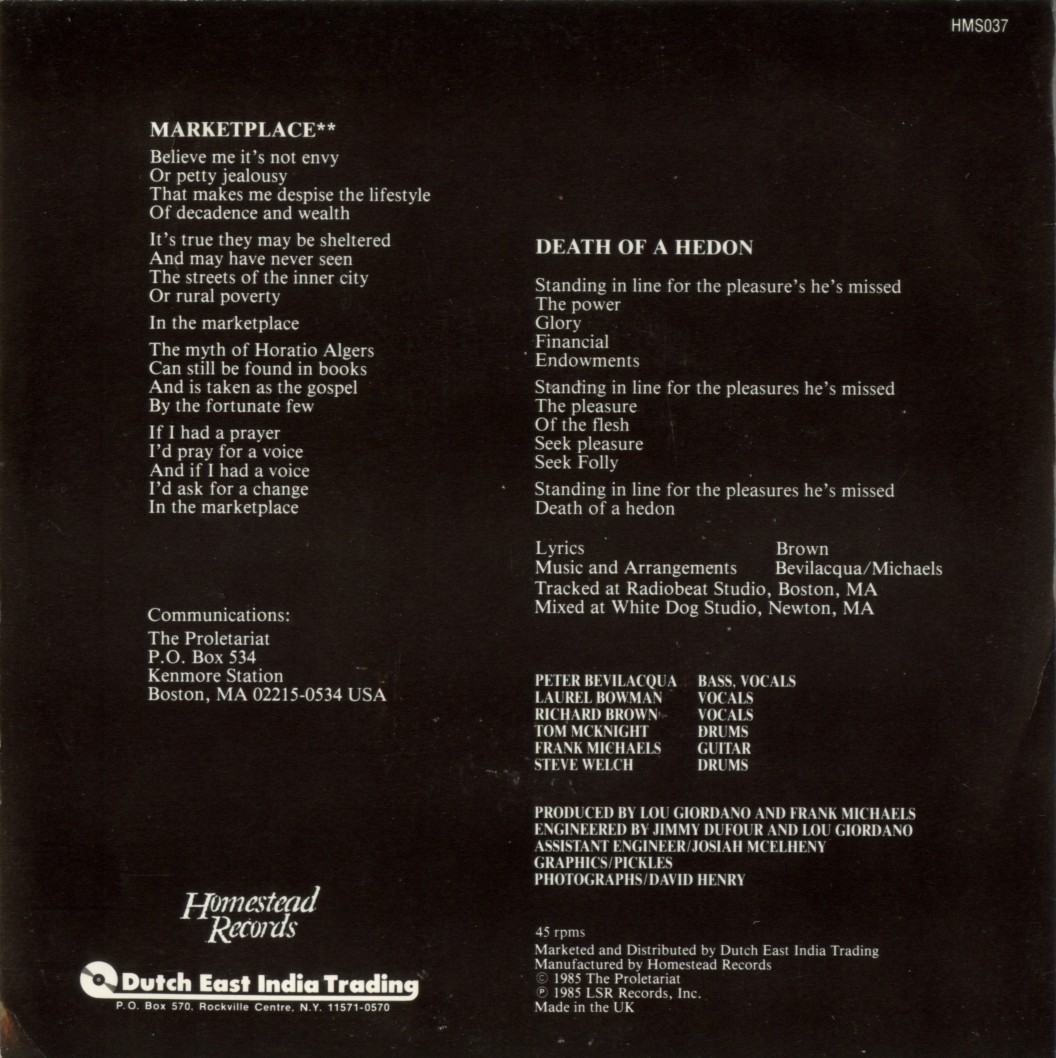 is a big stretch, at least if you're talking about hardcore as a musical style. While the other Boston bands were defining a local sound based on speed and brutality, the Proletariat were melding the styles of their heroes the Sex Pistols and Gang of Four to create sparse, edgy, but always hyper-aggressive melodic punk rock. Although they had no experience when they formed in southeastern Massachusettes in 1980, by 1981 they were already terrorizing New England with obscene Pistols covers and their own developing tunes. In '81 they put out a 7-song demo tape called Distortion which became popular with critics and college DJs. Some of these songs would end up on their first LP, but only after the Proles were introduced to a wider hardcore audience through the seminal compilations This is Boston, Not L.A. and Unsafe at Any Speed put out by Modern Method. Although lyrically and musically they had little in common with bands like Gang Green and Jerry's Kids, the Proles had the same raging intensity; this was no small feat for a band that never accelerated beyond a driving, mid-tempo dirge. Singer Richard Brown, his British-sounding voice always on the verge of breaking, barks out sentence fragment lyrics like commands while bassist Peter Bevilacqua and drummer Tom McKnight keep the pace with a disciplined, militaristic steadiness. Frank Michaels' guitar alternates between jarring upstrokes and overdriven chords to create the panicked environment in which all Proletariat songs grow. The lyrics are topically straightforward but often come in bits and pieces, letting the music and the energy level speak for the missing parts. The band came into their own with the release of their first LP, Soma Holiday on the Radiobeat label in 1983. This record contains 18-blasting artpunk anthems that tackle a variety of social issues from an insightful but distanced perspective. Although more direct in their critique than Gang of Four, the Proles never had the blatant agenda of Crass. Brown was an avowed Marxist, but it seems he subsribed more to the man's critique of capitalism than any kind of determinist revolutionary dogma. Incidently, the band were actually members of the "working class," having dropped out of college to drive trucks and work in supermarkets. Two years later they followed up the first LP with a 7" and a second full length. Indifference, on Homestead records, found the band adding more layers and melodies to the songs - including an appearance by Roger Miller of Mission of Burma, who plays piano on "An Uneasy Peace." This record also featured back-up vocals by Laurel Bowman, whose soft-toned, epic voice provided a startling contrast to Brown's. He would later go on to take over completely on vocals in a late, unrecorded incarnation of the band. An alternate version of the song "An Uneasy Peace" appeared on the classic R Radical double LP compilation P.E.A.C.E. giving the Proles their rightful place alongside that who's who of great punk bands. These days, the three founding members of the band, Richard, Peter, and Frank are back together with a new drummer in a band called Churn. All released Proletariat material is compiled on a double CD collection which, despite being on Taang!, is really great. Also the first LP was rereleased recently on tape on a more DIY label called Social Napalm. There are also some radio sessions they did which are worth picking up. 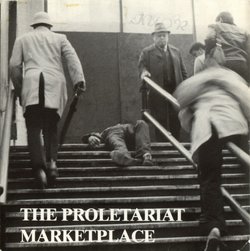 death of a hedon · marketplace · 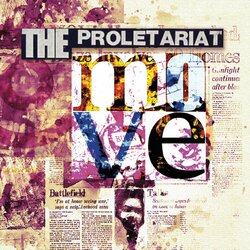